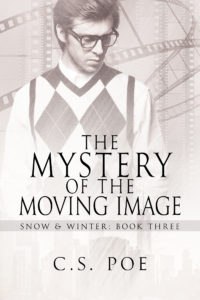 It’s summer in New York City, and antique shop owner Sebastian Snow is taking the next big step in his relationship with NYPD homicide detective, Calvin Winter: they’re moving in together. What should have been a wonderful week of playing house and celebrating Calvin’s birthday comes to an abrupt end when a mysterious package arrives at the Emporium.

Inside is a Thomas Edison Kinetoscope, a movie viewer from the nineteenth century, invented by the grandfather of modern cinema, W. K. L. Dickson. And along with it, footage of a murder that took place over a hundred years ago.

Sebastian resists the urge to start sleuthing, even if the culprit is long dead and there’s no apparent danger. But break-ins at the Emporium, a robbery, and dead bodies aren’t as easy to ignore, and Sebastian soon realizes that the century-old murder will lead him to a modern-day killer.

However, even with Sebastian’s vast knowledge of Victorian America and his unrelenting perseverance in the face of danger, this may be the one mystery he won’t survive.

4✨s – I think this is the best offering in the series yet! Sebastian Snow and his boyfriend Calvin Winter have just moved in together as the story begins. At work, Sebastian receives an unexpected, anonymous package with a Kinetoscope and a reel of rare film showing a murder. Of course this sets off events and he just can’t help trying to solve a hundred-plus years old murder. At least this time he mostly tries to heed Calvin’s warnings, with a couple of exceptions that seemed safe enough at the time. In other words, he ends up in more danger than he could imagine, not all of it his own fault. This time he ends up with Neil around to help too. After the truly awful way their relationship ended in book one, an accidental meeting leads to the start of a friendship and he actually ends up helping Sebastian a couple times.

His role though, made me feel like Neil stood out more in the story than Calvin. Yeah, I’m still not happy with how Calvin is presented. Calvin is too placid when I think he should be reacting strongly. I’d like to feel more energy between Calvin and Sebastian, like stronger give-and-take dialogue between them. Calvin is too often just a voice on the phone or in the background, making him feel less than three-dimensional to me. They do have good sexual chemistry but there isn’t as much included this time with so much going on elsewhere. I’ve tried to set my opinions about Calvin aside, since the mystery is the main focus and this one really is a doozy. There’s a unique premise, complexity in the plot, more action and danger plus the misdirection really works. I didn’t guess who the mastermind was at all. Max was around quite a bit too and the exchanges between him and Sebastian are the funniest parts. It was also nice to see Sebastian’s dad again and offering some sage advice.

I will admit the ending was unexpected and charming too. It makes me wonder just what we might expect from the next, supposedly final episode. C.S. Poe will need to really surpass herself after the quality of this mystery plot. This could stand alone to a point but I wouldn’t advise it. For one thing, I don’t think it fully explains Sebastian’s vision problems. I recommend this one for the murder mystery aficionados that like an edgier plot and a quirky protagonist.

About C.S. Poe:
C.S. Poe is an author of gay mystery, romance, and paranormal books. She is a reluctant mover and has called many places home in her lifetime. C.S. has lived in New York City, Key West, and Ibaraki, Japan, to name a few. She misses the cleanliness, convenience, and limited-edition gachapon of Japan, but she was never very good at riding bikes to get around.

She has an affinity for all things cute and colorful and a major weakness for toys. C.S. is an avid fan of coffee, reading, and cats. She’s rescued two cats—Milo and Kasper do their best on a daily basis to sidetrack her from work.

C.S. is a member of the International Thriller Writers organization.