Russell tells himself he’ll marry Susie because it’s the right thing to do. His summer job coaching her water ballet team will give him plenty of opportunity to give her a ring. But on the team’s trip to the annual Aqua Follies, the joyful glide of a trumpet player’s solo hits Russell like a torpedo, blowing apart his carefully constructed plans.

From the orchestra pit, Skip watches Poseidon’s younger brother stalk along the pool deck. It never hurts to smile at a man, because good things might happen. Once the last note has been played, Skip gives it a shot.

The tenuous connection forged by a simple smile leads to events that dismantle both their lives. Has the damage been done, or can they pick up the pieces together? 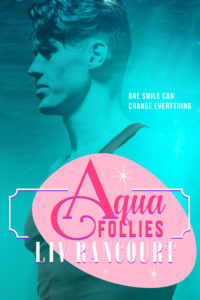 Excerpt:
It was almost midnight when Skip and Ryker slid into the red Naugahyde booth at Beth’s Café.

“What’s the word from the bird?” Ryker clutched an unlit cigarette between his fingers.

I saw the man of my dreams. Skip covered his grin with his hand, picking a tamer response. “I want some red meat.”

“You and me both.” Ryker lit up, blowing smoke across the table. He was small and dark with a slicked-back duck butt and a greaser’s sneer. Whenever the subject came up, he claimed he got his coloring from his little Welsh grandmother. Skip usually asked if the milkman had been Italian.

Skip recognized most of the usual crowd, the musicians, the waiters, the kind of people who were out and about when late night turned into early morning. He extended his long legs under the table. After so many hours in the aqua theater’s small orchestra pit, his knees and calves thanked him for the stretch. Since Ryker was blowing smoke over his half of the table, he guessed he could take up some extra floor space.

The waitress came over, her blue-green uniform barely buttoned over her buxom chest and a fine black net covered her peroxide curls.

“What can I bring you gentlemen?” She directed her question at Skip. He aimed her at Ryker with a good-natured toss of his head, sending curls spilling into his face. All the pomade in the world couldn’t make his hair behave.

“How ’bout a burger with a side of titties…um, taters?” Ryker’s grin broadened the harder she blushed.

Skip kicked him under the table and gave the waitress an apologetic grin. “I’d like a steak and a large Coke.”

She passed them menus and stalked off. Ryker flirted with every woman he came across. He’d meet the right girl at some point, but till then, he put himself at risk for getting slapped unless Skip intervened.

An older, grumpier waitress came to take their order.

“It’s your own fault,” Skip said, glad there was still a waitress willing to help them. He needed to get to bed before his alarm went off in the morning. Four thirty was gonna come early. Getting to bed after midnight just made him hate his job at Boeing even more.

The grumpy waitress scratched their order on a pad and shuffled off, and Ryker tapped his cigarette against the edge of the plastic ashtray. “I wanna get my hands on that little dark-haired aqua baby we saw tonight.”

Skip disguised his laugh by flipping his hair out of his eyes. She was cute, but not his type. None of the water ballet girlies were his type. Their coach, now, the one who’d been stalking along the deck like Poseidon in chinos? Skip didn’t try to hide his grin. Tall and broad and clean-cut, he was the kind of man who caught Skip’s attention.

A fellow could get arrested if he happened to cross a vice cop, but Skip hadn’t been caught yet. He’d give a strange man a friendly smile, just to see what would happen. Tonight he would have had to be dumb and blind not to notice the flash of interest the man at the lake had done his best to hide. Nothing would come of it, but a guy could dream, couldn’t he?

About Liv Rancourt:
I write romance: m/f, m/m, and v/h, where the h is for human and the v is for vampire … or sometimes demon … I lean more towards funny than angst. When I’m not writing I take care of tiny premature babies or teenagers, depending on whether I’m at home or at work. My husband is a soul of patience, my dog’s cuteness is legendary, and we share the homestead with three ferrets. Who steal things. Because they’re brats.

Thanks so much for having me as a guest! Since this is my second visit, I chose questions I didn’t answer last time.