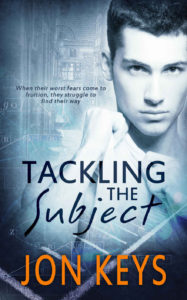 Sam struggles with issues from high school and his biology tutor triggers them all. Gordy isn’t sure he wants to deal with the trouble Sam represents.
Sam Doherty, a twenty-two-year-old computer science major, is struggling to pass the required classes in biology. While Sam is out and proud, he’s secretly dealing with an assault he suffered in high school. Sam may be the president of the campus Gay-Straight Alliance, but he’s struggling to find balance in his life. When he realizes he needs help with his class, he signs up for a biology tutor, but the guy who arrives for their meeting sets off all his triggers.

Gordy Hager is a biology whiz kid, the best tutor at the University Help Center—and the star tackle on the football team. Sam despises him at first sight. Gordy is the brainless caveman athlete that Sam still has nightmares about. Unable to control his reactions, he drives Gordy away and makes it plain he will never ask for his help. One week and a failed quiz later, Sam knows he has to swallow his pride.

But while Gordy might be a nice guy, he isn’t going to help someone as insulting as Sam. Sam’s determination pays off, and he gets Gordy’s assistance, but his grades are only the first pothole their relationship hits. From their discovery that they both are gay, to supporting each other against family, their connection has more than its share of issues. But when their worst fears come to fruition, they struggle with a way to save Gordy’s college football career and face Sam’s issues of intimacy.

3.5✨s – I read this story on a whim, liking the idea of a hurt/comfort story and trying a new author. All third person, the story was quite sweet and tender at times, there was realism in the effects of the attack on Sam, and Gordy’s concerns were authentic. When Sam meets Gordy, he reacts negatively and is extremely rude in his rejection of the tutor. This was less mean than he was with some following rejections of poor Gordy. It was made more understandable as details revealed how deep his trauma ran. I still felt Gordy was too forgiving and might have demanded more acknowledgment from Sam about his behavior. I did connect with Gordy and Sam, just not as strongly as I would have preferred. Following the initial friendship and growing feelings between them, gave good insight to their characters but the execution and pacing was sometimes inconsistent, including Sam’s reactions to Gordy as they became physical. Time jumps weren’t always transitioned well and made the progression of their relationship harder to follow.

When Gordy decided to come out to his family, rather than doing it just for himself, it felt as if he was motivated by Sam’s harsh remarks. That seemed wrong, set against Sam’s involvement in the Gay-Straight Alliance, psychological issues or not. I did like that it wasn’t shown becoming excessively dramatic with Gordy’s family. However, the situation set up by the football coach was over the top, with the caricature thug. I wasn’t impressed with some overly detailed sex scenes or the repeated interrupted attempts. Some seemed unnecessary. As a whole, it was executed well in parts, some not as well and my aging viewpoint might have colored other impressions. I view it as an NA book, since they were college age and as I’m several decades removed, you may want to take my views with a grain of salt.

About Jon Keys:
Jon Keys’ earliest memories revolve around books; with the first ones he can recall reading himself being “The Warlord of Mars” and anything with Tarzan. (The local library wasn’t particularly up to date.) But as puberty set in, he started sneaking his mother’s romance magazines and added the world of romance and erotica to his mix of science fiction, fantasy, Native American, westerns and comic books.

A voracious reader for almost half a century, Jon has only recently begun creating his own flights of fiction for the entertainment of others. Born in the Southwest and now living in the Midwest, Jon has worked as a ranch hand, teacher, computer tech, roughneck, designer, retail clerk, welder, artist, and, yes, pool boy; with interests ranging from kayaking and hunting to painting and cooking, he raws from a wide range of life experiences to create written works that draw the reader in and wrap them in a good story.

Where to find Jon Keys:

One thought on “RELEASE DAY REVIEW: Tackling the Subject by Jon Keys”