Blurb:
Dwyn is a young man in the small, isolated town of Manicouga, son of the Minstor, who is betrothed to marry Kessa in a few weeks’ time.

Mael is shepherding the remains of his own village from the north, chased out by a terrible storm that destroyed Land’s End.

Both are trying to find their way in a post-apocalyptic world. When the two meet, their love and attraction may change the course of history. 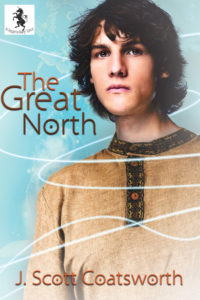 Excerpt:
“We celebrate Dwyn’s Day as a testament to true love and sacrifice. It’s a remembrance of the way things were and the way they’ve come to be. In the end, let it be a reminder that every one of us has the power to change the course of events through love.”
—Dillon Cooper, New Gods and Monsters, Twenty years After Dwyn

The gray clouds scudded by overhead, blowing in quickly from the east.

Dwyn shivered and pulled on his woolen cap. It was cold out, unusual for so early in the fall. The rains had been heavy this season, the wettest in a generation, and Circle Lake was close to overflowing its banks. If he stretched to look over the rows of corn plants, he could see the waters lapping at the shore far below, as if hungry to consume his village of Manicouga.

His father had consulted the elders, some of whom had seen more than fifty summers, and everyone agreed things were changing. Whether that augured good or ill was anyone’s guess.

He shrugged and moved along the row of plants, breaking off ears of corn and throwing them into the jute sack that hung from his shoulder.

Ahead of him, two of his age-mates, Declan and Baia, were working their way down the next two rows.

Dwyn frowned. He got distracted easily, and he’d let the two of them get a jump on him. That wouldn’t do.

He redoubled his pace. He moved with focus and purpose, and soon he was closing the gap with his friends.

“Someone’s being chased by a lion,” Baia said with a laugh.

“Or a tiger.” Declan grinned, his nice smile only missing one tooth, lost to a fight with one of the Beckham brothers the year before.

Dwyn grinned. “Or a bear?” Dwyn only knew lions and tigers from the fairy tale his mother used to tell them, “The Girl and the Aus.” He had no idea what an Aus was, either.

Bears he knew. The hunters occasionally brought one home, and old Alesser had a five-line scar across his wrinkled face that he claimed came from one of the beasts.

A shout went up from ahead of them. Dwyn craned his neck to see what the ruckus was, but he couldn’t make out anything. “What’s going on?”

Declan, who was half a head taller, looked toward the commotion. “Hard to tell. Something down by the road.”

Dwyn laid down his sack carefully and ran up the hill to one of the old elms that dotted the field. He climbed into the tree, scurrying up through the leaves and branches until he had a clear view of the Old Road. It ran from up north to somewhere down south, maybe near the ruins of old Quebec if the merchant tales held any truth. Hardly anyone from Manicouga ever followed it, but occasionally traders would follow it to town, bringing exotic wares and news from the other villages that were scattered up and down its length.

They swore it went all the way down to the Heat, the great desert that had consumed much of the world after the Reckoning.

“What’s going on down there?” Baia called from below.

Dwyn tried to make sense of it. “There are three wagons coming down the pass. They’re loaded up with all sorts of things. They don’t look like traders though.”

The first of the horse-drawn wagons had just reached the field above the main township. It stopped, and someone hopped off to talk with the villagers who had gathered from the fields.

“We need to get down there,” Dwyn said, scrambling down the tree trunk. “Something’s happening.” Nothing new ever happened in Manicouga, and he wasn’t going to miss it.

He grabbed his sack and sprinted toward the Old Road, not waiting to see if Declan and Baia followed.

Guest Post:
In the middle of 2016, I was challenged to create an MM romance based on an existing myth.

When I was growing up, I was crazy for mythology. I devoured books on the Greek Gods, in particular, and couldn’t get enough of the epic nature of mythic fiction.

So when I had to choose a myth to recreate, I searched first in the Greek Pantheon of the Gods. But over time, my tastes have changed, and there’s always the desire as a reader and a writer to explore over the crest of the next hill.

So I broadened my search, and came across a Welsh holiday I’d never heard of before. From Wikipedia:

Dydd Santes Dwynwen (Welsh for St Dwynwen’s Day) is considered to be the Welsh equivalent to Valentine’s Day and is celebrated on 25 January every year. It celebrates Dwynwen, the Welsh saint of lovers… In the 5th Century Dwynwen fell in love with Maelon Dafodrill. Maelon returned her feelings but they could not be together for her father forbade the marriage and her father had already promised her to someone else. Dwynwen, distraught by her love for Maelon, prays to fall out of love with him. After falling asleep, or possibly while still awake in a woods she had run to in her distress, Dwynwen was visited by an angel, who appeared carrying a sweet potion designed to erase all memory of Maelon and turn him into a block of ice. God then gave three wishes to Dwynwen. First she wished that Maelon be thawed, second that God meet the hopes and dreams of true lovers and third that she should never marry. All three were fulfilled, and as a mark of her thanks, Dwynwen devoted herself to God’s service for the rest of her life.

Forbidden love, gods and angels, and a frozen love – this story had all kinds of things I could work with. I’d already decided I wanted to write a bit of a post-apocalyptic tale, but as it unfolded on my screen, it decided it wanted to be more of a fantasy, so I followed my muse.

Dwynwen became the handsome young and conflicted Dwyn, and Maelon cecame Male, the beautiful, exotic blond from a town north of Manicougan, where the story takes place.

Oh, and did I mention the world is full of reawakened gods?

I hope you enjoy the tale. And if you’re familiar with the story of Dwynwen of Wales, I hope you get a kick out of this thoroughly gay re-enactment of that classic tale.

3✨s – For such a short story this novella is chock full of quite an incredible world.

When we meet Dwyn I was not impressed. In fact I never love him, but I do grow to see what Mael sees. Their entire relationship is taboo in Dwyn’s world, but love is love, and their love may be able to save the world.

Insta-love (yay), tons of judgy McJudgertons (boo), a crashed wedding (yay), a world destroying storm-perhaps the work of a vengeful god (boooooooo). The story was a bit over the top, yet the parallel story line of the couple and their children of the storm shelter made for an interesting read. This is the first book in the series, I’d definitely be interested to follow along on the journey. 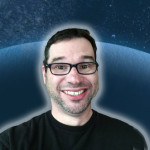 Scott has been writing since elementary school, when he and won a University of Arizona writing contest in 4th grade for his first sci fi story (with illustrations!). He finished his first novel in his mid twenties, but after seeing it rejected by ten publishers, he gave up on writing for a while.

Over the ensuing years, he came back to it periodically, but it never stuck. Then one day, he was complaining to Mark, his husband, early last year about how he had been derailed yet again by the death of a family member, and Mark said to him “the only one stopping you from writing is you.”

Since then, Scott has gone back to writing in a big way. He has sold more than a dozen short stories – some new, some that he had started years before. He is currently working on two sci fi trilogies, and also runs the Queer Sci Fi (http://www.queerscifi.com) site, a group for readers and writers of gay sci fi, fantasy, and paranormal fiction.

Where to find J. Scott Coatsworth:

Other books by J. Scott Coatsworth:

One thought on “RELEASE DAY REVIEW: The Great North by J. Scott Coatsworth”