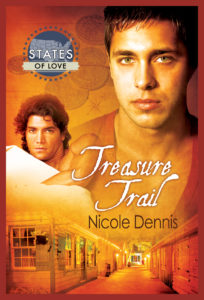 Owner of Matey’s Tavern, a popular brewpub-tavern in St. Augustine, Florida, Derick Keyes loves his adopted hometown and job. He also harbors a crush on a pirate captain.

Tour guide for the popular Pirate Pub Walking Tour, Christopher Easton portrays a pirate captain as he takes visitors on a guided tour of St. Augustine, stopping at certain taverns for a pint of grog and tales of the golden age of piracy. With a little liquid courage, Chris breaks the cycle when he talks to Derick. Things change between them. Derick wants a chance for more with Chris.

During the Annual Pirate Festival, Derick creates a treasure hunt for Chris after “cursing” him. To break the curse, Chris must find four clues before the final battle on Sunday night. Only then can the curse be broken.

4 ✨s
Treasure Trail is a delightful story of Derick, a bar owner in St. Augustine and Chris, who plays a pirate and leads a pub crawl. Derick is shy and suffers from social anxiety. He prefers to stay hidden in his office rather than out mingling with the customers. Chris is a very outgoing, personable man who loves his role as a pirate. He’s good at what he does and the tour groups always love him. When Chris decides to finally see if Derick is interest in him, Derick couldn’t be more happy about it. Derick has had a crush on Chris for awhile, but was too shy to do anything about it.

Derick and Chris spend time together and the attraction is undeniable. Derick really wants more with Chris so he devises a treasure hunt for Chris as part of the annual Pirate Festival. If Chris finds all of the clues, Derick is prepared to offer his heart.

I loved this story. Both men are sweet and the other characters in the book are fun additions to the tail. The treasure hunt is endearing with a finale that was sweet enough to cause cavities. This is a wonderful, short story that is an easy read and definitely enjoyable.