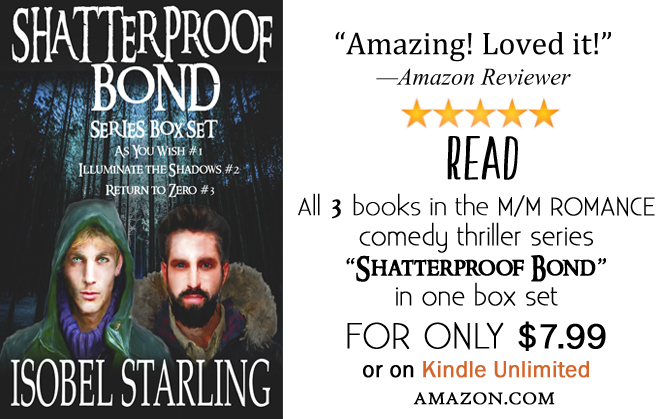 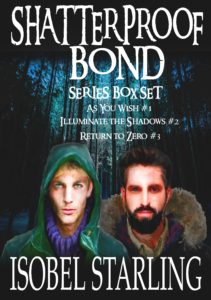 The Shatterproof Bond series will clutch at your heart and leave you aching for more. Come along on a thrilling adventure with Scotsman Declan Ramsay and Englishman Sam Aiken featuring soaring M/M romance, love, laughter and sizzling lovemaking.

Excerpt:
“Flight B-A-one-four-three-two to Edinburgh will be boarding from Gate A twenty-six.”

Sam Aiken paused and glanced up at the yellow airport signage directing that the walk to Gates A1-A26 would take ten minutes. “Shit,” he muttered under his breath. Sam’s flight to Edinburgh was also due to take off in ten bloody minutes. He shouldered his heavy rucksack and sprinted through Terminal Two at London’s Heathrow Airport, ducking and diving around fellow travellers.

It was partly Sam’s fault that he had been delayed. Initially, it was by choosing the wrong queue and getting stuck in the security check line for twenty minutes. And then, by attempting a conversation with a security guard and being given a thorough groping in response. If he hadn’t been so stressed, Sam might actually have enjoyed the attention.

Sam Aiken was over six feet tall and wore his sandy-blond hair to his shoulders. His boyish face, tanned by the Saudi Arabian desert winds, had sprouted a monstrous attempt at a beard. It looked ridiculous. It couldn’t even be called a beard, more scrub than forest! Sam had spent the past year in the Middle East, where the beard is the symbol of manhood and honour, so he’d grown it to try and fit in. It worked there, but back in the UK, it just made him look a bit grubby. Sam was dressed in knee-length khaki shorts and an over-washed, cranberry-red T-shirt. His appearance was that of your average backpacker, so why security had singled him out for the extra attention, Sam didn’t know. Maybe he should know better than to try and crack jokes with security officials, especially when they had his balls in their hands.

“Nice wand! Watch where you’re sticking that thing, I might like it!” Sam joked nervously in his soft British accent. The very well built, alpha security guard waving the metal detector wand over his body glared at him. Sam arched his brows and grinned, hoping to inspire an illicit smile from the man, but instead the security guard pulled him aside and got his friend to observe as he gave Sam a thorough feel up. He wished he had kept his mouth shut. That thirty minute delay left Sam on a knife-edge.

As he ran through the featureless, white airport corridors towards Gate A26, Sam wasn’t sure now whether he would make the flight. His mind raced with the snowball effect of that possible future event. All of his father’s well made plans would be shot to shit, and he would be the reason— in the dog house and only back in the UK an hour.

Sam turned into a wide, open-plan lounge. Out of nowhere another traveler suddenly appeared, cutting across Sam’s path, dragging a black, wheeled suitcase. Sam couldn’t stop himself from tripping. He fell forwards, and then halted in mid-air. The broad masculine hand of the traveler was gripping his bare forearm to prevent the fall. He pulled Sam to right himself. The two men glared at one another.

“You watch where you’re going, eejit!” the stranger retorted in a posh Edinburgh brogue. The Scotsman rushed off, dragging his suitcase, and Sam continued to run on to the correct gate, fretting internally about what idiot’s people can be.

When Sam arrived minutes later, he saw a throng of passengers milling around, and on glancing at the info board, he read there was a delay of ten minutes. Sam breathed a deep sigh of relief. He unhooked his rucksack and found a wall to slide down. He searched in the front pocket of his pack, drew out his phone, and made a call.

“Hi this is Samuel Aiken. I have a one thirty p.m. pick up from Edinburgh Airport. Well, my flight is delayed by ten minutes. I just wanted to let you know. Great, see you then.” Sam ended the call and glanced down at his left forearm. He saw the outline of red grip marks. He absently rubbed the imprints left by the Scotsman with the wheeled black case, unable to deny that being touched so roughly had made warmth flood into his gut.

About Isobel Starling:
Born in Germany, Isobel Starling spent most of her twenty-year professional career making art in Ireland. She relocated to the UK and, faced with the dreaded artist’s creative block, Isobel started to write and found she loved writing more than making art. The Shatterproof Bond series is an Amazon Gay Romance bestseller. Isobel has just completed her ninth book and signed French and German and Italian, translation and publishing rights deals for the whole Shatterproof Bond series. The As You Wish translation “Comme Vous Voudrez” is a best seller on Amazon France. It was released in German in March 2017.

Where to find Isobel Starling:

Other books by Isobel Starling: