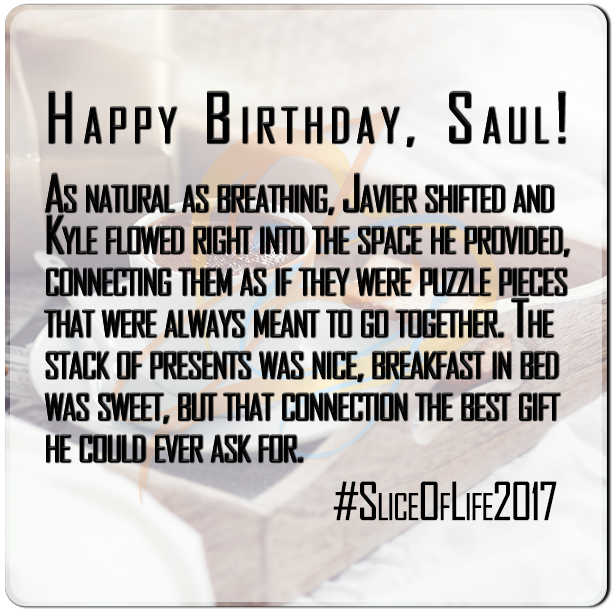 © 2017 Jessie G Books, Inc. Unauthorized use and/or duplication of this material without express and written permission from the author is strictly prohibited. Excerpts and links may be used, provided that full and clear credit is given to Jessie G and Jessie G Books, Inc. https://jessiegbooks.com

The bedroom was quiet when he woke. More importantly, the bed was empty which meant both his pups had woken before him. Though rare, it was not unheard of and usually came with the side benefit of having his lovers try to wake him. There wasn’t a better alarm in the world than their hot mouths working over every inch of his body and he’d become a master at pretending to be asleep to prolong the experience. For sure, he couldn’t think of a better way to start his birthday.

His pups weren’t known for being quiet even when they wanted to be. More often than not, Kyle couldn’t resist playing with the more serious Javier until he smiled and laughed. He loved listening to their hushed attempts not to be heard—the happy whispers, the giggle Javier tried to hold in that prompted a snort from Kyle that made it impossible for either of them to stop. Then the way they clung to each other while they tried to calm down. Of course, just when they thought they had it under control, something silly would set them off again.

In all his thirty-five years, he’d never had as much laughter as Kyle brought them in the last two. When they first met, Saul could see that fun-loving façade hid a man who’d spent a decade proving he was independent and self-sufficient. He still was those things, but now he had a safe place to let those burdens go. Allowing them to care for and protect him, and assuming a submissive role had freed him.

No, it had done more than that, it had freed them all. First and foremost, he made Javier laugh. A lot. All the time. And the affection between them was constant, palpable in the air even if they weren’t touching, which they always were. Saul would have been content right there, seeing the men he loved happy together, but Kyle had given them more.

Taking a more dominant position with Kyle enhanced Javier’s submission to Saul. Instead of struggling to switch, both sides seemed to encourage each other. And for Saul, having Javier submit without fear—without the telltale bracing or, worse, the involuntary flinching—gave him the confidence to assume the role that was most comfortable. Most of the time, at least.

The door knob jiggled, pulling him out of his thoughts at just the right moment. He cocked his head and immediately smiled as he heard the familiar whispering. They seemed to be debating their approach which made him consider his own position. It would take at least another minute for them to decide, more if they started laughing, so he had plenty of time to figure out if he wanted to hold position or pretend to be asleep.

In the end, he crossed his arms over his chest and just barely wiped the smile from his face when the door burst open. With Kyle balancing a tray of food and Javier’s arms overflowing with presents, it took them a second to realize he was already awake. They shared a quick glance, shrugged, and screamed, “Happy Birthday!”

Despite his attempts to remain stoic, his smile slipped through when Javier dumped the packages on the bed and then climbed into his lap, showering him with kisses between whispered birthday wishes. Kyle was slower and when they came up for air they found him kneeling on the bed beside them watching with a smile of satisfaction on his face. Saul knew, if he bound Kyle to the chair in the corner and made him watch as they made love, Kyle would get off just as hard as they did.

“Come here, pup.” They had all day to play. Right now, Saul just wanted his arms full of his men.

As natural as breathing, Javier shifted and Kyle flowed right into the space he provided, connecting them as if they were puzzle pieces that were always meant to go together. The stack of presents was nice, breakfast in bed was sweet, but that connection the best gift he could ever ask for.

© 2017 Jessie G Books, Inc. Unauthorized use and/or duplication of this material without express and written permission from the author is strictly prohibited. Excerpts and links may be used, provided that full and clear credit is given to Jessie G and Jessie G Books, Inc. https://jessiegbooks.com