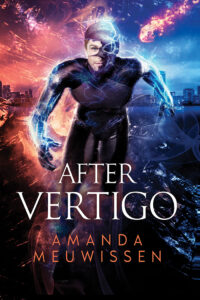 In a flash, the world changed. A solar flare—later dubbed Vertigo—activated the DNA of more than half the world’s people, granting them special abilities. Brilliant scientist Benjamin Krane might be Powerless, but his inventions are the only thing giving the police a fighting chance against super-powered evil. Ben doesn’t have much of a life beyond work, and when he gets wind of a robbery one evening, he decides to test his newest invention personally….

A thief, rogue, and shameless flirt, Grey Miller—aka the Streak—likes shiny things, but he doesn’t hurt people. When Ben catches him—and proposes they team up against the real bad guys—Grey doesn’t know whether it’s the offer or the man he can’t resist. But one thing’s for sure—they’re an ideal match in more ways than one.

With a psychotic supervillain’s catastrophic plan moving forward and everyone he cares about in danger, now might not be the best time for Ben to give in to Grey’s seduction, no matter how tempting. Grey is a man of secrets, and if Ben wants a future with him, he’ll have to learn to trust Grey—and himself.

#5✨s by Xanthe
So, this story was actually less serious than I thought it was going to be. Probably the science talk that scared me, flashbacks to school, but the character of Grey Miller aka The Streak is fun, flirty and doesn’t seem serious about things until he is caught by Benjamin Krane and the two strike up a deal to try and stop the supervillains trying to take over their city.

This is a different plot to anything I’ve read before with a solar flare affecting certain people’s genes causing them to become Enhanced or Super. Grey has the power of speed and the only thing left behind is a lightning streak as he moves so fast. He’s used it to become a thief but never harming anyone which Ben uses to his advantage when asking for his help. Ben is a top scientist, inventing items to help the police in bringing down Supers including handcuffs that dampen their powers and now a gun the affects them for up to 10 minutes. His mind is crazy smart but he has a lot of trouble with social anxiety and stepping outside of his comfort zone. This seems to disappear around Grey though as he grows in confidence and allows his intelligence to be put to use out in the field.

The two men make a great team and it’s fun reading their relationship develop as they become friends though with Grey’s constant flirting it’s easy to read how much more they’d both like it to be. However, Grey still has secrets and Ben has never had a relationship before so there’s plenty of reluctance on Ben’s part to trust Grey, though it’s absolutely worth the wait when we do find out Grey’s history. I love Gideon, Ben’s cat and how the two men strike up a deal that there will only be the possibility of a date if Grey can get Gideon to approve of him, which definitely takes some work with how different he is!

Ben’s family is wonderful. Protective but supportive of him and his work and they help the duo with their plan to bring down the supervillains who, as it turns out, may have a slightly different end to their plan than Ben was thinking. A lot of the secondary characters really boost the story and add a good amount to the flow of the plot, enhancing it and giving the readers more enjoyment. The bad characters are really well written with some great powers mixed in that I never would have thought of.

This was an amazing read! I really enjoyed it and had to keep going once I’d started. It’s a slow burn romance with aspects of sci-fi, mystery, and crime. A lot is included that different people can get out of it. This was a first for me from this author but I will definitely be looking out for more in the future.

About the Amanda Meuwissen
Amanda Meuwissen is a primarily gay romance writer, as well as Marketing Operations Manager for the software company Outsell. She has a Bachelor of Arts in a personally designed major from St. Olaf College in Creative Writing, and is an avid consumer of fiction through film, prose, and video games. As author of the paranormal romance trilogy The Incubus Saga, young adult novel Life as a Teenage Vampire, the novelette The Collector, and superhero duology Lovesick Gods and Lovesick Titans, Amanda regularly attends local comic conventions for fun and to meet with fans, where she will often be seen in costume as one of her favorite fictional characters. She lives in Minneapolis, Minnesota, with her husband John and their cat Helga, and can be found at www.amandameuwissen.com.