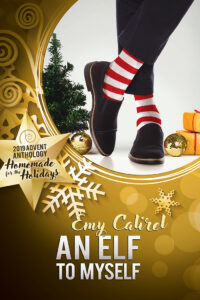 The last thing Wilhelm expects to find at Michaels, three days before Christmas and in search of a gift to make for his niece, is one of Santa’s elves—a cute one with a wicked, inappropriate sense of humor and a kinky streak. Alabastair may have been kicked out of Santa’s village, but he’s still a Christmas expert. And he’s determined to give Wilhelm and his family the best holiday he can.

With only two days to turn the Grinch’s house into a Christmassy wonderland, they have a lot on their plate. Among the glitter and the cheer, Wilhelm and Alabastair might find more than just the holiday’s magic. But will it be enough to keep Alabastair in Wilhelm’s bed and life when the North Pole calls him back?

4.5✨s by Xanthe
I think that this may be my favourite of the DSP Advent so far.

Wilhelm is kind of a Scrooge but with good reason giving his history over the festive season. Alabastair changes things for him though with his festive cheer, cheekiness and ability to make everything better in Wilhelm’s life. Alabastair refuses to allow Wilhelm to welcome his family into his home with no decorations and the time they spend together to rectify that unites them for a common goal brings the Christmas back into Wilhelm’s life, including the Christmas Elf.
They are clearly a couple made for each other, even when having a disagreement there is love shining through in their actions. Feelings clearly come through the writing and though it was an unexpected plot line, it is a really enjoyable Christmas romance that gives all the feels of the season.

About the Emy Calirel
Emy Calirel grew up in France, but also spent some time in Africa as a child. When she finally reached adulthood, she jumped on opportunities and moved to California, then Ireland, before coming back to her roots. San Francisco still holds her heart, though, and always will.

After trying a couple different jobs, she settled down and now works in a funeral home/monumental masonry, which she loves. To handle life’s daily stress, she laughs with her coworkers a lot and spends any free time she gets reading or daydreaming about queer folks finding their happily ever after.

She’s a cat owner, a plant killer, and a San Francisco Giants fan. Wanderlust flows in her veins, and her goal is to visit every capital in Europe—if she can ever stop herself from going back to London over and over again.

Emy’s muse is a sassy being who expertly farms plot bunnies in Emy’s overgrown imagination. As a consequence, Emy has more stories and characters living in her head than she’ll ever be able to write in her lifetime. She’s fine with it, though, as, like a child, she loves playing in her sandbox.

A documentary enthusiast and curious to a fault, Emy often loses herself in research and will happily share her discoveries with everyone. Did you know most mammals empty their bladders in twenty-one seconds?