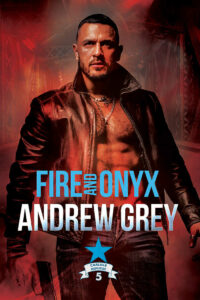 Undercover sheriff’s deputy Evan Whittaker is close to infiltrating a vicious local gang. He just needs to find an opening. Instead, he finds Wes Douglas, a web designer who is raising his irresponsible brother’s son. Wes agrees to help with a stakeout, but he pays the price when his home is destroyed in a shootout.

Evan’s always been a loner, but when he invites Wes into his home, living together feels right, and the two men only grow closer as they adapt to each other’s lives and rhythms. A future as a family looks brighter by the day, but all of that could collapse when Wes’s brother—and his connection to the drug dealers—crashes into the life they’re carefully building.

4✨s by Xanthe
As ever, Andrew Grey has written a story full of drama, strong characters, emotion and a connection built in a tense situation.

Wes has guardianship of his nephew, Greyson, loving and caring for him as though he was his own son. His brother, Trey, is mixed up in trouble that is rising fast in Carlisle but he still wants his brother to come back to them and even have a relationship with his son. Evan is searching for those who are bringing] trouble to his town with drugs and guns. A failed attempted raid leads to him observing those around town and running into Wes and Greyson. After talking, he realizes the help that he could possibly be but an event leads to Wes needing shelter and Evan jumps to offer that and his friendship. Both men feel the connection that they have made but are wary of how quickly things develop and what is going on with the case and Trey’s involvement.
Evan is a strong, protective detective who has spent several years doing undercover work and is now finding himself wearing thin. This new possible thing with Wes is something he never thought of for himself after a previous error of judgment but he finds himself thinking about it more and more. They have a spark from the start that just gets hotter as we go through the story as well as a family appeal of the two men with Greyson and the warmth and happiness that they all experienced together. Wes is strong and protective in his own way, especially over Greyson who has come to mean as much to him as if he were his own son, working to try and provide for them both and ensure the young boy’s safety with everything going on. Though he can’t help the pull of family and wanting to protect his brother, even if he’s one of the ones causing trouble right on their doorstep, trying to get Evan’s help while the detective working the case. Greyson steals the show whenever he’s in a scene, learning to walk, talk and to interact with those around him. He’s just so adorable! And his words in the final chapter just stole my heart.

Wes and Evan’s relationship is quick to start and build but it goes with the flow of the story and feels natural for what they are both going through. There are many tense times with the crime that’s occurring in town as well as the work that Evan is doing to try and bring a stop to it, leaving Wes on the sidelines, worrying. Their connection felt real for them as a couple and loved the time they got to spend together as a trio, getting to know each other and grow closer. We get to hear from several of the characters from previous books, especially Pierre and Jordan who are a great support system for both men. The plot of the book is interesting and keeps you thinking about the crime and drama of what’s going on and how it will affect people, especially Trey and Wes.

A great addition to an entertaining series and another that I would recommend reading. Though you can read this one as a stand-alone, I’d recommend the series overall as then you get to know all of the characters, how they come together and how they come to know each other.

About Andrew Grey
Andrew Grey is the author of nearly 100 works of Contemporary Gay Romantic fiction. After twenty-seven years in corporate America, he has now settled down in Central Pennsylvania with his husband, Dominic, and his laptop. An interesting ménage. Andrew grew up in western Michigan with a father who loved to tell stories and a mother who loved to read them. Since then he has lived throughout the country and traveled throughout the world. He is a recipient of the RWA Centennial Award, has a master’s degree from the University of Wisconsin-Milwaukee, and now writes full-time. Andrew’s hobbies include collecting antiques, gardening, and leaving his dirty dishes anywhere but in the sink (particularly when writing). He considers himself blessed with an accepting family, fantastic friends, and the world’s most supportive and loving partner. Andrew currently lives in beautiful, historic Carlisle, Pennsylvania.