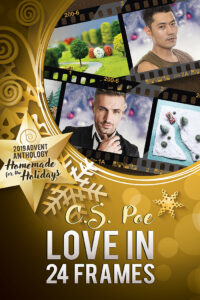 Declan Groves is a CPA in New York City. His adult life is dictated by routine and borderline monotony. The need to express himself, in ways his career and crippling shyness have never allowed, leads Declan to becoming an amateur stop-motion filmmaker.

The one problem is that Declan is also in love with the Wandering Artist Studios receptionist Shota Watanabe. Shota has always had a smile and engaging comment ready for Declan, but even if it is more than casual politeness, Declan hasn’t been able to get out more than a tongue-tied sentence at a time. And a man like Shota surely has no intention of waiting forever.

So when an unexpected change to Declan’s daily schedule throws the two together outside of the studio, it might be the catalyst needed to explore what’s unspoken between them. But if they’re to have a future, Declan needs to find a way to tell Shota how he truly feels.

3✨s by Xanthe
This is a sweet, slow-burn romance following Declan, an older man who has been loving Shota from afar for a few months now. The most he can manage to get out as he walks past him on the reception desk is hello with his shyness barely allowing him that. However, an accidental meeting one day shows that it’s not just Declan that has been crushing on someone but with company policy prohibiting any fraternization, it is decided that dating can wait until the new year.

This doesn’t stop Declan showing his care in other ways, bringing Shota dinner, some tea, etc when he says hello every night and he even becomes brave enough to show the work he does in his studio as a stop-motion filmmaker, possibly helping to show his true feelings to the man he really cares for.

Declan is adorable in wanting to treat Shota right. His actions speak really well for himself when he has trouble doing so verbally and even better is that Shota gets it and reciprocates making this an enjoyable short romance to read. I wouldn’t really say it was festive apart from the snow but I liked it all the same.

About the C.S. Poe
C.S. Poe is a Lambda Literary and two-time EPIC award finalist, and a FAPA award-winning author of gay mystery, romance, and speculative fiction.

She is a reluctant mover and has called many places home in her lifetime. C.S. has lived in New York City, Key West, and Ibaraki, Japan, to name a few. She misses the cleanliness, convenience, and limited-edition gachapon of Japan, but she was never very good at riding bikes to get around.

She has an affinity for all things cute and colorful and a major weakness for toys. C.S. is an avid fan of coffee, reading, and cats. She’s rescued two cats—Milo and Kasper do their best on a daily basis to distract her from work.

C.S. is a member of the International Thriller Writers organization.
Her debut novel, The Mystery of Nevermore, was published by DSP Publications, 2016.