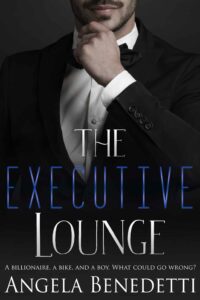 Blurb:
Rob Arvazian just graduated with an engineering Bachelor’s and an MBA, and landed a dream job as the personal assistant to a hot Silicon Valley CEO. Emphasis on hot — personally, as well as in the business world. The tiny financial aid clerk in Rob’s brain is telling him to just do his job and start paying down his loans, but other parts of his body are wishing the gaze Nick Castle turned on him was more dominant and less businesslike.

Getting involved with your boss is stupid, Rob knows that. But he’s only had casual play partners before — never someone who was his. And it feels like Nick could fit perfectly into that part of Rob’s life.

Is it worth taking a chance and hanging his whole life on one strong, sexy man?

Xanthe’s Review
The Executive’s Lounge started as a novella for a book event and has been developed into a full story by author Angela Benedetti.

Rob is a recent graduate with a Bachelor’s and an MBA, landing himself a job as PA to the top man at an engineering company. We start with an incident involving Rob and several top-level members of the company. Things that happen here have little effect on the rest of the story but not a lot. It’s when back home that Rob gets down to work alongside his boss, Nick. There’s a lot of engineering speak that comes up in several spots so you need to pay attention if, like me, you’re not up on all of the terms.

I didn’t feel much of an attraction, though, until they acted upon it. There wasn’t really a sense of connection there until then. I enjoy how Rob “talks” to the reader as though he’s going through the story with us. He speaks very well about being a submissive and the power they really have in a dom/sub relationship. Whenever he has troubles or thoughts that need talking through, he has a really good friendship group that are supportive and friendly throughout the story but especially when drama unfolds between the MC’s.

Overall it’s a well-written story. It flows well and held my interest as we go from different places and events – work, relationships, BDSM event. It did dip a little for me in one or two sections that didn’t seem too relevant but that’s overshadowed by the rest which I enjoyed reading. One point that I noticed throughout was that ROb constantly called Nick Mr Carter, even in his thoughts which I found a little strange. One of those things that once I thought about, I saw it constantly. I could see this becoming a series as there were several other characters, those in Rob’s friendship group and those at work, who need their own HEA’s.

A recommended story to read, for those interested in or maybe new to the world of rope play and enjoy a good dom/sub dynamic.

I hope you enjoy my work and that you’ll let me know what you thought. Feedback from readers, including constructive criticism, are always welcome at AngieBenedetti at gmail dot com. Thanks!